Deathsongs From The Hymnal Of The Church Of The Final Pilgrimage 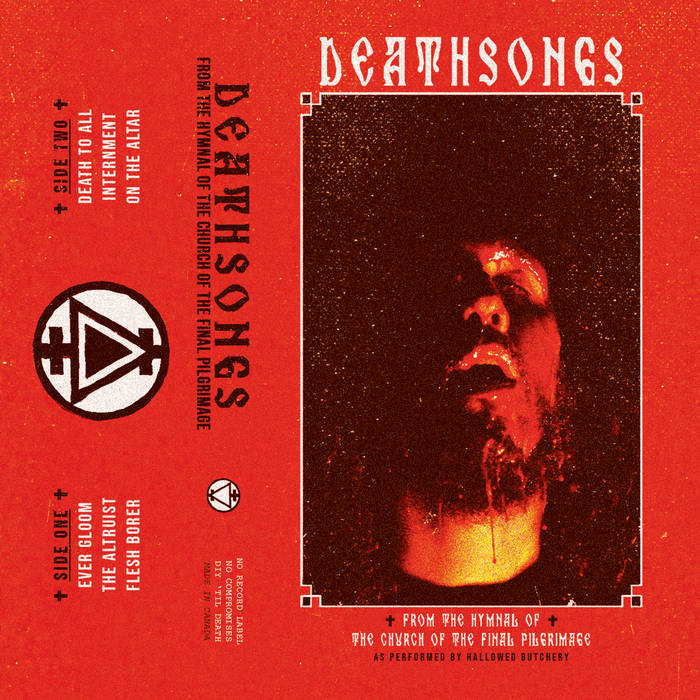 tobias_rieper Weird but enjoyable melting pot of doom, industrial and folk... maybe? Guitars sound really heavy but you also get acoustic guitars, industrial drums and synths. Track 2 & 4 show the more industrial side. The last track could have easily been some lame acoustic song but there's a twist. Guttural growls are great but I didn't mind the clean singing for once. Probably because it has a story to tell; TLDR: "Honey, I'm off to the death cult... :-)". Samples don't get in the way. Favorite track: The Altruist.

ChristopherAtom I have no idea if anything I'm reading about this album is true, but I don't care. Nothing will top this vibe in 2020. What an insane story.

dyre666 Like dying and being reborn only to die again!!! And again!!! It's massive!!! Favorite track: Death To All.

sarah__lynn You've been one of my favorite doom musicians for more than a decade, even well before that, you were really talented. I am beyond excited to hear your return to music. I was actually lamenting to a friend about 4 months back how Funeral Rights for the Living is one of the best doom metal albums ever created and how you had seemingly just disappeared. The new stuff is right up there with it. So fucking good. Heavy, atmospheric, and brutal. Perfect.

Bertrand Marchal Massive album, twisted work of art; such a rare band, in both senses. I wasn't dreaming of a new album. And it's a feat of crooked extreme Death Doom, extravagant crossover between doom, folk, indus, between elegiac respites and wells of horrific darkness. And when it dooms, it dooms hard!

Emperor of the Underground of Doom..

Hallowed Butchery is the project of Maine recluse Ryan Scott Fairfield. Under the moniker, Fairfield writes, performs, and records experimental industrial doom metal in the privacy of his rural Maine home.

In 2010, Vendetta Records released his debut LP “Funeral Rites for the Living.” A unique amalgamation of funeral doom, industrial, and neo-folk, the release was generally met with glowing praise or utter confusion by critics and listeners alike.

Soon after, Fairfield went to work recording a 2nd full-length album. Shortly after its completion, disillusioned and depressed, Fairfield scrapped all the recorded music and artwork. He abandoned the Hallowed Butchery project, moved further into the woods, and disconnected himself from the underground music scene in its entirety.

Nearly a decade later, he’s re-emerged with a rediscovered passion and a new full-length album that begins where the debut album left off.

It once again blurs and warps disparate genres into a bizarre cacophony that is truly unlike anything else out there today. There are moments that are reminiscent of the harsh industrial clanging of Godflesh and Swans that seamlessly shift into crushing funeral doom ala Evoken and then into neofolk-esque passages that wouldn’t be out-of-place on a Death In June record. However, none of it is disjointed; it all comes together to create a sound that is uniquely Hallowed Butchery.

Inspired by his time living with a Luddite death cult in rural northern Maine, Fairfield has written an album that is wholly devoted to the worship of death. It quotes from the tenets and the hymnal of The Church of The Final Pilgrimage, as well as from the teachings of their leader Jonathan Curless.

To coincide with the album’s release, a music video was shot for the song Death To All. Fairfield recreated one of the church’s death rituals in the middle of a frigid January night deep in the woods of rural Maine.

Buckets of blood, animal skulls, fire, ritualistic dancing -- all occurring during a Nor’easter blizzard. A perfect physical representation of the bizarre, dark, cold music found within this new album from Hallowed Butchery.

----ABOUT THE CHURCH OF THE FINAL PILGRIMAGE----

Deep in the remote woods of rural Maine, there resides the sole members of a largely unknown religious group named The Church of the Final Pilgrimage. Unlike most sects, the members of the group do not worship a deity but rather they devote their lives to the worship of death. Death is their god.

The Church’s membership consists of thirty people: ten adults, three teenagers, and seventeen young children. They live and worship together within the walls of their Maine-based compound. Within the compound, there are no modern amenities – no running water, electricity, or gas-powered automobiles. They live a simple, self-subsistent existence.

The group’s leader, 68-year-old founder Jonathan Curless, is also the author of The Church’s sacred text: The Consecrated Tenets of The Church of the Final Pilgrimage. A copy of the text has been included with this album. It has been altered aesthetically but the text is in-tact.

I obtained a copy of their tenets during a 2 week stay in their compound in the summer of 2017. By chance, I had befriended Jonathan Curless while he was proselytizing outside of the compound’s walls. Due to my intense interest in his teachings, he invited me to come and live with him and the church members. I agreed to.

My time there was spent preparing the harvest from their many communal gardens, as well as taking part in a deer hunt using handcrafted weapons. I was also able to attend some of the church’s ceremonies and was made privy to many of Jonathan Curless’s teachings. Jonathan spoke often and at length throughout the day, regardless of the activity, delivering impromptu sermons to all whom were in earshot.

He spoke of the futility of technology and the evils of man, always reassuring everyone that by being there with him, they were on the right path: the Final Pilgrimage. He claimed that those outside of the church were likely to die young due to their life choices or the inverse: they would live far longer than nature intended by utilizing artificial means. He frequently commended the church members for seeing beyond the madness of the modern world.

Nightly the members would build a large fire. The children would gather sticks and firewood, while the women prepared the evening’s meal. Wild game was often the protein of choice, but on two occasions during my stay, a suckling pig was slaughtered.

Those two occasions were referred to by the members as Death Ceremonies. Upon spilling the pig’s blood, each member would line up to dip their finger into it. They then would smear the blood across their foreheads and move aside to allow the next person to do the same.

When all had the blood upon their faces, two men would gut the pig, and bring it over to the fire to roast it on a spit. As the flames flicked the carcass, Jonathan Curless would sing a cryptic, chant-like hymn. The other members joined in shortly after and as they began to sing, they also would dance around the fire. There was no unison to the dancing. All danced in their own way. However, over and over again, they sang these words together:

When the pig was fully roasted, the singing and dancing ceased, and we all sat down together to feast.

To the uninitiated this bizarre ritual would seem more like a morbid rite rather than worship. To Jonathan it was an act of love. He was adamant that modern society had lost its reverence for death and had replaced it with fear. “People are scared of the grave and therefore they refuse to face it,” he said.

He continued: “They package their meats up in plastic, mentally separating the living animal from the dead flesh. They frequent churches where the preachers assure them that there is an afterlife waiting for them when they die. They alter their faces and their bodies in an attempt to stay young. When death comes knocking they fight it off with medicine.”

Admittedly, I never had any intentions of permanently settling within the walls of the compound. I believe Jonathan thought the opposite. Therefore, when I left, I assured him that I was only heading home to gather up my wife, children, and a few belongings, and that I would return soon after.

Instead I took what I witnessed and learned and wrote an album dedicated to my time there: "Deathsongs from the Hymnal of the Church of the Final Pilgrimage"

The lyrics in these songs are highly influenced by the teachings of Jonathan Curless. In fact, some of the lyrics are quotes directly from his sermons and hymns. Also of note: on the song “Death To All,” there is a sample in the beginning of the song of Jonathan speaking. Unbeknownst to Jonathan I had a small tape recorder with me. I was able to capture this one recording of him during one of our nights together.

As noted previously, I have also included with the album a copy of The Consecrated Tenets of the Church of the Final Pilgrimage. I hope this offers insight into the church. Please read along as you listen.